Share on TwitterShare on FacebookShare on PinterestShare on Email

Jimmy Lewis and Sons had its beginning in 1969 as a one man and woman septic tank business called Jimmy Lewis Contracting. After purchasing a backhoe, a used dump truck and trailer Jimmy and Portia Lewis ran the business from their home, working long hours to meet the demands of the growing community in Person County.

Jimmy and Portia Lewis started their family business in 1969 when they purchased a backhoe, a used dump truck and a trailer and began installing septic systems in and around Person County. They ran the business from their home, both working hard to make the business a success. Jimmy ran the equipment, and Portia helped him load pipe in the morning and did the books at night. She supplemented their income by working a separate job during the day until the business grew too large for her to continue.

After several years, the Lewises purchased more equipment, hired more workers, and began clearing lots. Soon they were expanding into many other areas of construction – and demolition. They began developing residential subdivisions, and continued to grow. In 1995, Carter – the first of the Lewis sons – joined the firm. His brother Retrac came aboard two years later, which prompted a new name for the company – Jimmy Lewis and Sons Excavating and Septic Tank Services, Inc.

Although the company has grown and the services offered have expanded, Jimmy, Portia and both sons still are closely involved in the day to day operation of the company. Jimmy and the boys will operate the equipment as needed, and Portia continues to work in the office. The family’s commitment to hard work has resulted in a company that customers all over North Carolina can count on for grading and septic systems – but also for quality and excellence.

Share on TwitterShare on FacebookShare on PinterestShare on Email 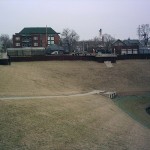 As urban and suburban development increased across the country, it quickly became apparent that developed land didn't handle rains and floods as well as undeveloped land. Even with something as essential as rainwater, too much of a good thing was … END_OF_DOCUMENT_TOKEN_TO_BE_REPLACED

This website uses cookies to improve your experience while you navigate through the website. Out of these, the cookies that are categorized as necessary are stored on your browser as they are essential for the working of basic functionalities of the website. We also use third-party cookies that help us analyze and understand how you use this website. These cookies will be stored in your browser only with your consent. You also have the option to opt-out of these cookies. But opting out of some of these cookies may affect your browsing experience.
Necessary Always Enabled
Necessary cookies are absolutely essential for the website to function properly. This category only includes cookies that ensures basic functionalities and security features of the website. These cookies do not store any personal information.
Non-necessary
Any cookies that may not be particularly necessary for the website to function and is used specifically to collect user personal data via analytics, ads, other embedded contents are termed as non-necessary cookies. It is mandatory to procure user consent prior to running these cookies on your website.
SAVE & ACCEPT